Cheers and ridicule for Tuesday, December 29, 2020

Note: For those of you who are wondering, has it been a lousy Christmas in our house. I sold my head so I could buy my dear, loving partner Michael a new treadmill, but he sold his legs so he could buy me a new fedora. I'm sure I'll laugh about it one day. But not today. Mainly because I don't have a head right now.

The voting ends in 7 days!

The days until the vote end with the runoff elections to the US Senate in Georgia: 7th

Percentage probability that an American is affected by Covid-19: 1 in 1,000

Percentage increases for our men and women in uniform that Trump vetoed over the weekend: 3%

Decrease in immigration-related arrests in 2020, mainly due to fewer border crossings and fewer operations: -27%

Year up to that Japan says it will be carbon free: 2050

Percentage probability that President-elect Biden told the New York Times that "I will be able to do things in the environment that all of you will not believe in": 100%

JEERS Whiplash: People kick when they're in the edition. With his failed presidency almost behind him, it is worth reminding us – as if we must – that Donald Trump stays stupid like a box of hammers. (Sorry for all the hammers who were offended after reading it.) In four years he never sat down publicly or privately to discuss politics on any subject in detail. Not the environment, not health care, not foreign policy, not weapons … nothing. Either his barely educated handlers let him read their words from a command prompt, or he simply promised generic "big, beautiful plans that go very quickly" followed by the weasel phrase "we'll see what happens". His ignorance showed again when he signed the combined budget and Covid-19 relief laws, but only after asking for it Right of veto "red line" Take out things he doesn't like. And this is run as well as you'd expect:

Associate press reporter Jonathan Lemire, who acted as guest co-host on MSNBC's Morning Joe, said the president ended up not receiving any of the changes he asked for after the law was passed last week.

"The president got nothing here but a few cable chyrons and frantic tweets," Lemire said. "There's no real suggestion that the two Houses of Congress make changes to the bill here."

Politico's Anna Palmer agreed, saying that Trump's move made little sense. "Trump was brought to the cleaners because of his own crisis," Palmer said. "I think it's a really fitting coda for the Trump presidency where you have a leader who didn't know Washington. "

If from Washington you mean "anything", I totally agree.

CHEERS to the new child under the Capitol rotunda. With all that other crap on his plate, California Governor Gavin Newsom also had the vital role of choosing Kamala Harris' successor in the Senate. "Choose me!" "Choose him!" "Choose them!" After weighing all the reasons and reasons, he made up his mind the first Latino in the state sitting at a desk in the upper chamber. Here are some things you need to know to help me ground yourself through Alex Padilla:

“Before one L.A. City Councilor (elected at the age of 26) and member of the Senate. For now CaliforniaState Secretary

"Supervised the Voter & # 39; s Choice Act, which allows ballot papers to be sent to all registered voters.

USA Today: "Padilla's appointment gives a new representation to Latinos, who make up the largest demographic in the state with nearly 40% of the population. But Newsom's election of Padilla also means there will be no black women among the 100." Member of the Senate. "

CHEERS to Texas. America28th state– I'm sorry, I won't call all of them a republic because your heads are big enough – celebrates its 159th birthday today. Yes, we remember them Alamo… and also that every governor you elected since Ann Richards has been hat and no cattle. On the flip side, you're the turf of Molly Ivins, LBJ, Jim Hightower, Beto O'Rourke and the gol'durn Castro brothers, and even Dwight Eisenhower spent his first two years there, so points for that too as for the further march towards purple status. Tonight in the pot: armadillo stew. But not real armadillos. We only serve tofudillos.

TALLY HO! to finally take the plunge. After the Conservatives excluded Britain from the European Union, they immediately set out not to know how the hell the split was going to happen. Similar to how Democrats deal with Republicans in this country, the EU had to do it too Great Britain by hand and patiently explaining how it would be done and that it would be very painful and that there would be chaos throughout the kingdom. Lo and behold, yesterday The act seemed sealed:

At a meeting of the ambassadors in Brussels, the 27 member states supported the 1,246-page contract that is to be "provisionally applied" by the end of the year. The decision will be formally (today) concluded in writing.

Michigan Republicans send the big lie home to die on…

It's time for Biden to use his tyrant's pulpit to…

Brexit in one picture.

A spokesman for the German EU presidency, which organizes the bloc's affairs, said the contract had been given a "green light". (…)

On Monday morning, Cabinet Secretary Michael Gove welcomed the deal, but said UK companies will face a "bumpy" period from January 1st. "Businesses need to make sure they are ready for new customs procedures, and we as individuals need to make sure our passports are up to date as they need at least six months to expire in order to be able to travel abroad" , he said. "I'm sure there will be bumpy moments, but we're there to try and do everything we can to pave the way."

The agreement was enforced after the final rule was approved: anyone caught transporting haggis Europe will face the toughest punishment in the EU: forced to eat haggis.

CHEERS at changing times. Today in 1852, Emma Snodgrass was arrested in Boston for wearing pants. Today she would be arrested for not wearing it. To discuss.

JEERS trying to have it both ways. Sarah Palin, who left the governorship of Alaska In the middle of her first term so she can fulfill her dream of becoming a snooki level celebrity is insane. Mad mad mad. In particular, angry with Wikileaks founder Orange Julius Assange, whom she calls "Treason." But recently she got a pillar of opinion over Iran published in USA Today, and guess what evidence it is quoted in the very first paragraph? Well guessed:

The Arab leaders in the region rightly fear a nuclear weapon Iran. We already suspected that, but Now we know for sure that diplomatic cables have leaked. King Abdullah of Saudi Arabia "often admonished them US. attack Iran to end its nuclear weapons program, "said the press release.

CHEERS to the 2020 benefactors. When it comes to being selected for the Hall of Fame of the Excellent Year, we wave goodbye so as not to have a prayer. Which is a shame, because every year a candidate receives a trophy, a certificate and a selection of tie clips or brooches. Nonetheless, over the past 52 weeks at C&J, in our "Who Won the Week" survey on Friday we rounded up ten candidates – actual, worthy people or organizations – who sparkled like jewels in the carnage and chaos. As we prepare to leave those 12 months of dumpster fires behind us, we continue to remember who you picked to be the best of the group. Here is Part II, which covers April, May, and June. Because the pandemic inundated everything, the medical community was largely given the greatest props. In these cases, we'll also include the runner-up to give you an idea of ​​what was bubbling in the room under the covid elephant:

10th of April Medical and essential business personnel. Runner up: The Democratic and moderate GOP governors, led by Gavin Newsom of CA and Andrew Cuomo of NY, are working together to meet their medical needs in the face of dithering and federal stone walls.

17th April Medical and essential business personnel. Runner up: The progressive judge Jill Karofsky and the Wisconsin Voters who risked their health to vote for the Supreme Court and Scott Walker's Dan Kelly looted.

April 24th Medical and essential business personnel. Runner up: The fed up nurses who literally put their bodies in front of the shiny new pickups of the Trump cult protesters Denver, Phoenix and elsewhere to protest their vicious ignorance

1st of May Medical and essential business personnel. Runner up: Canadian Prime Minister Justin Trudeau for banning offensive weapons following the worst mass shootings in the country's history, a move supported by 80% of Canadians.

Dr. Rick Bright, one of the many patriots who whistled for the Trump administration.

8th of May Medical and essential business personnel. Runner up: Dr. Rick Bright, the administration's chief health officer, who became a whistleblower after being instructed to carry out orders based on Trump's wishes and watched health warnings being ignored.

May 22 Medical and essential business personnel. Runner up: President Obama for his virtual opening speech, which was broadcast on major networks and was so successful that his successor went into a fit of rage.

May 29th Medical and essential business personnel. Runner up: The national backlash to George Floyd's murder through Minneapolis Police officer Derek Chauvin and the president's threat to shoot protesters are quick and deafening

June 5th The peaceful protesters, including Rahul Dubey, who housed more than 60 people in his home on curfew and prevented them from being attacked by Trump's Gestapo who captured them 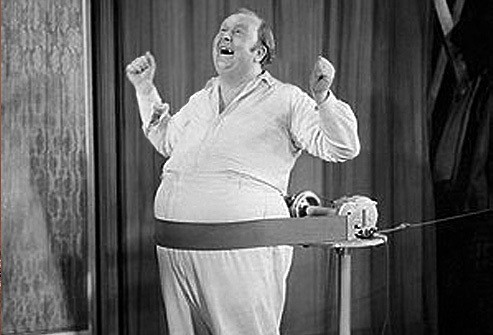 All of our winners will have a choice of a Trident nuclear submarine or a Ronco abs.

12th of June The wave of Georgian primary voters who raised their middle finger on the GOP election suppression machine and braved rain, coronavirus and polling station to cast their votes.

June 19 "All of the above" led by America800,000 dreamers as the Supreme Court upholds President Obama's DACA order … and The LGBTQ rights movement, as the Supreme Court 6-3 ruled that workplace discrimination is illegal under Title VII of the Civil Rights Act of 1964.

Tomorrow: our winners from July to September. Spoiler alert: Unfortunately, the list doesn't include "Guy who pushed Lindsey Graham into a well" because it didn't. But, hey, don't give up hope … we have two days left.

I wish you a tolerable Tuesday. The ground is open … What are you cheering and mocking about today?

"Well, there are some people who are so lying that I just wouldn't put them on the air. Bill in Portland Maine I would never book it from Daily Kos. These are just people splashing around in the children's pool the way most people breathe. There is no value in that. "

Kamala Harris & # 39; Kwanzaa celebration video fails as she is overwhelmed up for alleged political strip